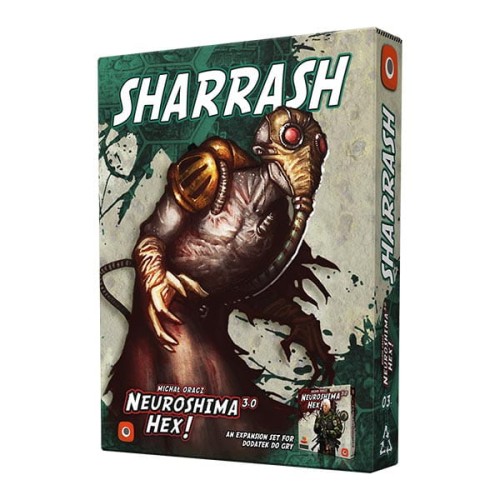 Sharrash: a mysterious yet well-organized community of mutant rats characterized by superhuman intelligence. They live underground, in the tunnels and canals of the destroyed cities, accompanied by their servants: degenerate humans and mutants. They do not allow strangers anywhere near them, fiercely defending their nests, and their fighters will not hesitate to offer their lives to the pack. The Sharrash rats are not mere animals—they are mutants who are smarter than humans and far less predictable. And now they have entered the Neuroshima Hex world.

The main advantages of the Sharrash army include their HQ's mobility, the ability to blow up even the fastest enemy units and to paralyze the slower ones, and using mortars to bypass the enemy's defenses. Another Sharrash's strong point is a special Foundation Tile (the Hole), which is difficult to discard and can easily thwart the enemy's plans.

Sharrash's weakness is the number of fighting units (smaller than in other armies), their low mobility, toughness, and initiative, as well as a complete lack of armors.

up
Shop is in view mode
View full version of the site
Sklep internetowy Shoplo.pl