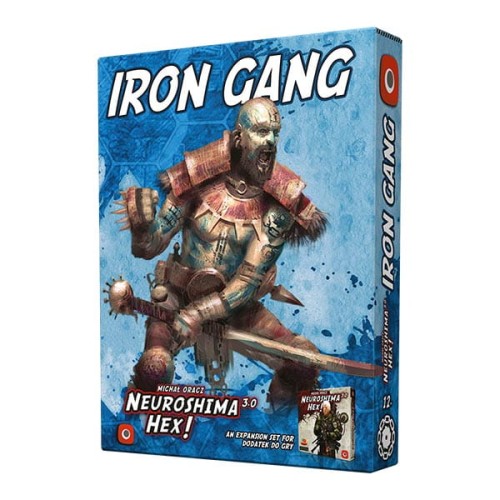 Engines roar through the night sky, as you see clouds of dust coming your way. Hot tires screech across the road, as hundreds of riders wreak havoc to anything on their path. They are followed by heavy armoured warriors, intimidating anyone with a cacophony of metallic sounds made by their chains, net launchers and other weapons of post apocalyptic war.

First, the riders are going to surround and entangle you with their web of steel. Melee fighter will follow soon after, bringing pain and destruction. Even if you are going to defend yourself, even if you manage defeat one of them, more replace their fallen comrade.

Death is coming your way. You can try to run. You can try to hide. But sooner or later, you are going to fall into their hands. This is not your average gang - this is IRON GANG, brutal group, who perfected the art of the hunt from the back of the steel steed.

Both HQ and certain units of IRON GANG army have Chain special ability, which can be activated outside of battle. Chain is connecting two units with that ability, if there is a straight line between them, and it allows them to target and hit any unit on that line.

One of the most interesting feature of IRON GANG is their chick on the bike unit, who has armour, mobility, chain and, on top of that, is treated as module, which increases the initiative of her allies.

Another unique feature of IRON GANG army is their ability to shoot ranged nets. Their special ranged unit has an ability to put a net once per player turn - it is not however particularly durable net, as it always goes down after the battle.

It is not the only ability of this net sniper. She is a true team player, as she supports her allies just like a medic module - and that ability is also ranged!

IRON GANGs members are devout fanatics to their cause - wreaking havoc and destruction across the land. Their fanatic unit has a fast attack in only one direction, putting him usually on the front lines. When he dies, he sacrifices himself and explodes just like The Clown.

Additionally, the army has a double mobility instant token - something you should expect from the road warriors!

up
Shop is in view mode
View full version of the site
Sklep internetowy Shoplo.pl